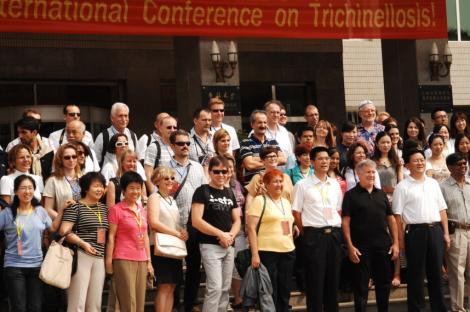 Physical and chemical factors and their influence on digestion of meat samples for Trichinella detection; the research made towards harmonization of veterinary law of Russia and the EU.

Andrew A. Vodnev, Sergey A. Bogdanov

The differences of vet. regulations to detect Trichinella larvae in meat samples by digestion in artificial gastric juice gained more significance due to recent attempts for unification of legalized methods. Prohibition of compressorium method usage according to the EU Regulation #2075/2005 have also driven much interest to the magnetic stirrer method and its equivalents among the laboratories performing routine slaughter meat tests.

We have carried out an investigation of the equivalence between the magnetic stirrer method of pooled samples according to #2075/2005 and current Russian method of the same analysis.

The influence of physical-chemical and physical parameters of digestion process on efficacy of Trichinella larvae release have been tested and allow to make the following conclusions:

• The recipe of artificial gastric juice, temperature and digestion\sedimentation phase duration prescribed in magnetic stirrer method are more effective than used in Russia.

• In the respect of sensitivity for dead larvae release the European method concedes the method used in Russia.

• Recommendations of samples collection from diaphragm pillar; without fascia and fat, described in EU Directive are difficult to perform in massive routine tests – best way would be to double the weight of meat taken and not to loosen the requirements to the volume of not digested residue.